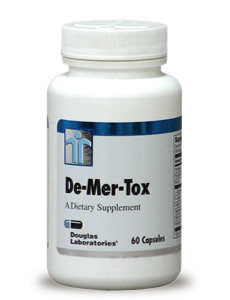 Suggested Use: Adults take two (2) capsules daily or as directed by physician. De-Mer-Tox capsules may be a useful dietary supplement for individuals who wish improve their nutritional detoxification systems during the stress of amalgam filling removal.

De-Mer-Tox - De-Mer-Tox capsules, provided by Douglas Laboratories, contain several vitamins and other dietary constituents supportive of metabolic processes that may protect against the toxic stress of amalgam filling removal.*

De-Mer-Tox capsules, provided by Douglas Laboratories, contain several vitamins and other dietary constituents supportive of metabolic processes that may protect against the toxic stress of amalgam filling removal.*

Body cells and tissues are threatened continuously by damage caused by toxic free radicals and reactive oxygen species (e.g., peroxides) which are produced during normal oxygen metabolism, by other chemical reactions, and by toxic agents in the environment. Free radicals are capable of disrupting metabolic activity and cell structure. When this occurs, additional free radicals are produced which, in turn, can result in more extensive damage to cells and tissues. The uncontrolled production of free radicals is thought to be a major contributing factor to many degenerative processes seen during aging.*

Glutathione is a naturally-occurring tripeptide of Lcysteine, L-glutamate and L-glycine. Glutathione is the essential cosubstrate for two major antioxidant enzymes in the body; glutathione peroxidase and glutathione reductase. As such, glutathione offers one mechanism for scavenging toxic free radicals.*

Glutathione is well absorbed in the intestine, and enters the blood and other extracellular compartments where it exerts much of its beneficial antioxidant effects. However, it can not effectively enter the cell. N-Acetylcysteine (NAC) is a precursor for the sulfur amino acid cysteine, and cysteine is used by the body to synthesize glutathione. In contrast to glutathione, NAC is efficiently transported into the cell where it is readily converted to L-cysteine for glutathione synthesis. NAC is well absorbed, and unlike L-cysteine, is virtually non-toxic. NAC is recognized as a safe, highly effective means of increasing intracellular glutathione stores. Aside from providing cysteine as a glutathione precursor, NAC also appears to have antioxidant properties by itself, and is a valuable sulfur donor for various metabolic needs.*

Alpha-lipoic acid is unique among biological antioxidants, because it is soluble in both water and lipids. This allows it to neutralize free radicals just about everywhere in the body, inside and outside the cells. Due to its unique sulfur-containing structure, alpha-lipoic acid can scavenge several types of free radicals, such as the highly reactive hydroxyl, and singlet oxygen free radicals. It is also capable of suppressing the generation of free radicals in the first place, since alpha-lipoic acid chelates transition metals, such as iron and copper. Because alpha-lipoic acid is involved in so many different antioxidant functions in virtually all body tissues, it has been called the universal antioxidant. Besides being a universal free radical scavenger, alpha-lipoic acid can also recharge other antioxidant systems throughout the body. It can extend the activity of vitamins C and E. and can also regenerate glutathione. Selenium is a cofactor to about 10 selenoproteins in the body; the most important of these appears to be glutathione peroxidase (GP X). GPX uses glutathione to reduce hydrogen peroxide and thus protect cells and plasma against free radical injury. GPX activity depends on an adequate supply of dietary selenium.*

No adverse effects have been reported.Keep out of reach of children.

Supplement Facts:
Suggested Use: Adults take two (2) capsules daily or as directed by physician. De-Mer-Tox capsules may be a useful dietary supplement for individuals who wish improve their nutritional detoxification systems during the stress of amalgam filling removal.
Two (2) capsules contain:
Other Ingredients: -
(-) There is no %DV or the manufactuer has not provided this data.

Phone us at 210-341-5454
Online Health Care Connection:
Do you have questions about this product or would like to connect with your Health Care Provider? We are proud to offer Virtual Visit. Get Healthy With Virtual Visit!
Your health care professional will be able to provide you with tailored product recommendations, advice, and exclusive promotions to help save you money on professionally formulated, high potency natural health products not found in stores. Don't have an account or would like to learn more about Virtual Visit technology?
Sign up here!
Office Location and Hours:
Franklin Chiropractic & Accident Clinics Inc
8077 Callaghan
San Antonio, TEXAS, 78230,