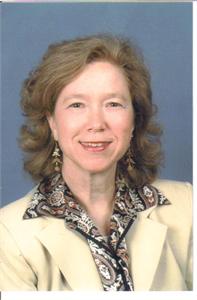 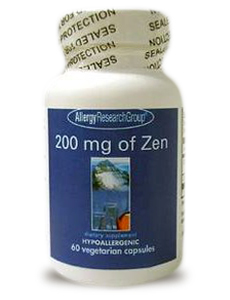 Suggested Use: As a dietary supplement, 1 or 2 capsules daily between meals, or as directed by a healthcare practitioner.

200 mg of Zen - For that Buddha-like feeling! 200 mg of Zen offers a unique and natural way to promote relaxation without sedation.* This formula contains a combination of L-theanine and GABA. L-theanine, found in green tea (Camellia sinensis), has been shown to stimulate the production of alpha-wave activity in the brain.* Alpha-waves are involved in reducing anxiety while increasing mental alertness and acuity.* GABA is a major inhibitory neurotransmitter that is critical for normal brain function.*

Zen in a Bottle: The Anti-Stress Effects of L-Theanine

"L-theanine is a unique preparation for reducing stress and anxiety. It has a profound effect on increasing overall life energy. I have found it to be extremely valuable in coping with the effects of the recent terrorist attacks." - John Diamond, M.D.

Just when we thought all the benefits of green tea had been revealed, along comes L-theanine. While there are numerous studies demonstrating the health benefits of tea, most people drink it for its flavor and relaxing effects. But that relaxing effect isn't just from the tea-drinking experience - it's also biochemical. Found almost exclusively in tea leaves - especially green tea (Camellia sinensis), L-theanine has been found to have a deeply relaxing effect via several neurological mechanisms without sedation.

L-theanine constitutes between one and two percent of the dry weight of tea leaves. It is the predominant amino acid component in tea, and exists only in the free (non-protein) form. Japanese researchers discovered the presence of L-theanine in tea leaves in 1949. Its chemical structure was then determined to be gamma-ethylamino-L-glutamic acid. The amount of L-theanine found in tea depends on the environment in which the tea is grown - such as climate, rainfall and sunlight. Because it requires very large amounts of tea in order to obtain a small amount of L-theanine, in 1990, Japanese food scientists developed an enzymatic process for making a compound that is chemically identical to the L-theanine found in tea. Favorable toxicology studies followed, and L-theanine became available in supplement form.

Dosage Oriental cultures have used tea for its therapeutic benefits for centuries. It is estimated that a heavy tea drinker (6-8 cups per day) will consume approximately 200-400 mg of L-theanine per day. Based on clinical studies, it has been established that L-theanine is effective in single doses ranging from 50 to 200 mg.

Mechanism Research with human volunteers has demonstrated that L-theanine creates its relaxing effect in approximately 30 to 40 minutes after ingestion. The mechanism behind this effect is two-fold:

2) L-theanine appears to play a role in the formation of the inhibitory neurotransmitter gamma-aminobutyric acid, better known as GABA. GABA blocks the release of the neurotransmitters dopamine and serotonin, and is well known for its relaxing effects.

In a study done in 1999 at the University of Shizuoka, Japan, several other unique properties of L-theanine were found. The research demonstrated that in addition to facilitating relaxation, L-theanine may benefit blood pressure regulation, learning performance, mental clarity, concentration, and immunity.

L-Theanine & Caffeine Although the calming effect of L-theanine may seem contradictory to the stimulatory effects of tea's caffeine content, research suggests that L-theanine exerts an antagonistic effect on caffeine's stimulatory action.

How L-Theanine Differs From Anti-Stress Herbs The main difference between L-theanine and anti-stress herbs such as valerian root, skullcap, passion flower, etc., is that it does not cause drowsiness. This could be very helpful for patients who want a calming effect without feeling sedated. In addition, unlike most amino acids, L-theanine can be taken with or without food and may be taken at any time. The material is also very pure and is not subject to fluctuations in efficacy as are herbs. There appears to be no side effects associated with its use.

L-Theanine & Serotonin Animal studies have also shown that administration of L-theanine reduces brain serotonin concentration by either reducing serotonin synthesis or degradation in the brain. It has been hypothesized that serotonin facilitates general and conditioned anxiety at the level of medial temporal lobe structures.

L-Theanine & Alpha-Wave Brain Activity During a volunteer study, test subjects ranging from ages 18 to 22 were divided into two groups: high anxiety & low anxiety using the Manifest Anxiety Scale. Over a two-month period, each volunteer was given a test solution of water containing either 50 mg or 200 mg of L-theanine. Test subjects' brain waves were then measured for 60 minutes after administration. Alpha wave activity was observed in test subjects within approximately 40 minutes of administration. In a separate study, it was observed that the intensity of alpha waves was determined to be dose dependent and detectable within thirty minutes of administration. The perceived relaxation effect was consistent with the detection of alpha waves.

Supplement Facts:
Suggested Use: As a dietary supplement, 1 or 2 capsules daily between meals, or as directed by a healthcare practitioner.
Two capsules contain:
Other Ingredients: Silicon dioxide, Carbowax
(-) There is no %DV or the manufactuer has not provided this data.

Phone us at 269-969-6115
Online Health Care Connection:
Do you have questions about this product or would like to connect with your Health Care Provider? We are proud to offer Virtual Visit. Get Healthy With Virtual Visit!
Your health care professional will be able to provide you with tailored product recommendations, advice, and exclusive promotions to help save you money on professionally formulated, high potency natural health products not found in stores. Don't have an account or would like to learn more about Virtual Visit technology?
Sign up here!
Office Location and Hours:
Women''s Health, PC
601 S. Shore Dr., Suite 224
Battle Creek,, MI, 49015,